Ethanol is a renewable source of fuel for vehicles, which is widely produced from corn. Ethanol production is reliant on the anaerobic fermentation of corn sugars by yeast. Scientists and industry professionals are constantly working to make the fermentation procedure more efficient. Different enzymes are added to the corn in order to break the starch into simple sugars that the yeast can process into ethanol. This lab allows students to experiment with different variables in the fermentation process to determine their effect. Students can then use their findings to develop a fermentation procedure that they may use on a larger sample for the distillation lab, Corn Mash and Distillation.

Variables teachers and/or students can select to test:

Students will design and conduct their own investigations to answer one or more of the following driving questions or develop their own. (Teacher may choose the questions, and it is recommended that all students test enzymes separately, mixture and control as one investigation.

Students will measure the amount of CO2 produced in the time frame that the teacher selects. This can be one class period or overnight. If allowed to run overnight, time-lapse video of the fermentation allows students to plot data points from the times they were not able to directly observe the fermentation.

Fermentation is an anaerobic process (without oxygen), carried out by yeast, bacteria, and even muscle cells. This is an alternative pathway for organisms to release energy from food when oxygen is not available. Yeast and muscle cells can carry out both aerobic respiration and anaerobic fermentation, providing an energy source when oxygen is scarce. The first step in both aerobic and anaerobic respiration is the breaking of a glucose molecule, called “glycolysis”. This yields two new ATP molecules (cellular fuel) per molecule of glucose broken. If oxygen is not available, the cell needs to recycle the molecules needed in order to break more glucose. In doing this, it converts the broken pieces of glucose (pyruvate) into different molecules. Yeast convert the pyruvate into ethanol, which is a renewable fuel source. This process also produces two carbon dioxide molecules for each glucose molecule fermented.  Students can determine the rate and amount of fermentation by measuring the amount of carbon dioxide it produces, as shown in the equation below.

In this activity, students will be using yeast, which needs glucose to break for fuel. Glucose and fructose are both simple sugars, but the ethanol industry feeds yeast corn, in which most of the sugars are contained in long chain molecules, or polymers called “starch”. The differences in these food sources are shown in the image below.

Several enzymes have the purpose of breaking starch up into smaller pieces, which are more useful for the yeast. Amylase is an enzyme that breaks starch into smaller pieces, while glucoamylase is more specialized in removing individual glucose molecules from the ends of the starch. Being proteins, enzymes have specific conditions in which they function more effectively, such as pH and temperature. Students may research or experiment to find the most efficient range for the enzymes used.

Length of Time for Preparation: 1 hour

Length of Time for Classroom Teaching:

Preparing Samples: (May be student or teacher prepared) 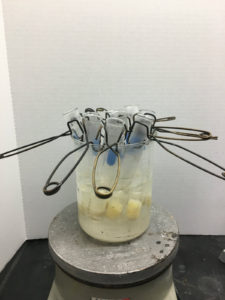 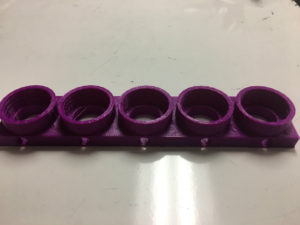 The .stl file for this manifold 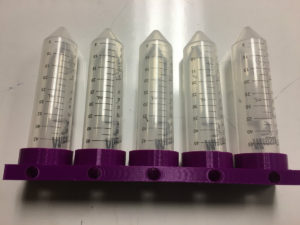 Manifold with centrifuge tubes inserted. The manifold will be submerged in water in this position to fill with water. 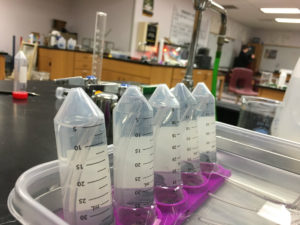 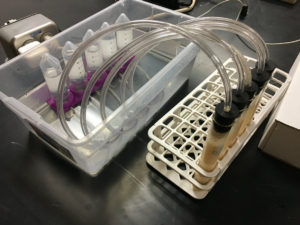 Student set up testing rate of fermentation with different varieties of yeast. 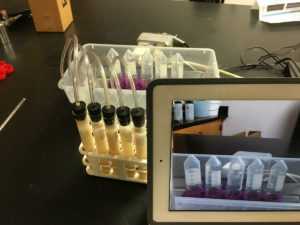 Student set up above with iPad included for time lapse recording of data. 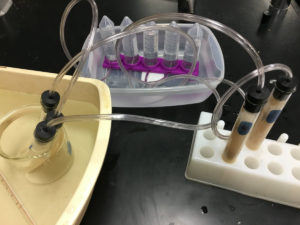 Student set up to test the effect of a warm water bath (38C-40C) on the rate fermentation.

The .stl file for the manifold.

The .stl file to print 3 manifolds

Multiple documents are available for the teachers and students to use during this lab. Use the Fermenting Fuel Student Handout to guide students through the lab, but to also conclude and reflect on what is was learned. Sample data, assessments, and answer keys are provided for teacher guidance.