The main renewable fuel derived from corn is ethanol. Ethanol is produced when yeast ferment the sugars released from starches in the corn. In addition to starch, corn plants also store energy in the form of oil. The extraction and use of these oils as a valuable coproduct is becoming a more common practice in the production of ethanol. These oils can be used in cooking, but also in the production of fuels in the form of biodiesel or renewable diesel. Biodiesel is a renewable, clean fuel that can be mixed with conventional diesel. Biodiesel, like ethanol, is made of carbon atoms that were in the atmosphere as carbon dioxide before being fixed during photosynthesis. Biodiesel is produced when the fatty acid chains of the oil are removed in a reaction with methanol and a catalyst. Renewable diesel is also produced from different oils by a catalyst driven reaction that allows for the precise manipulation of the molecules, producing an even more stable product.

After completing these activities the student will be able to:

Materials for analyzing viscosity of fuels

The production of biodiesel requires the use of hazardous materials. Methanol is extremely flammable and toxic by inhalation and ingestion. Use extreme caution and review the following documents  thoroughly before proceeding. Safety tips for handling methanol are available at: https://www.flinnsci.com/api/library/Download/762ec945eb5744518e71a014f92818cb

Petroleum diesel is a hydrocarbon that is refined from crude oil that is pumped from underground. Diesel is the group of hydrocarbons ranging from C10H22 to C15H28, having an average of C12H24. This fuel is a mixture, typically containing 75% saturated hydrocarbons and 25% aromatic hydrocarbons.

Fats and oils are classified in a group of compounds called triglycerides. These molecules are made up of a glycerol and three-fatty acid molecules. Animal fats tend to be saturated triglycerides, having all single bonds between carbons in the fatty acids. This makes the chains nearly straight and allows them to solidify at higher temperatures. Plant oils are typically unsaturated, having at least one double bond. The fatty acid bends at this double bond and causes the oil to stay liquid at lower temperatures.’ 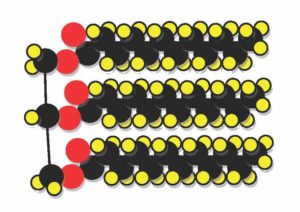 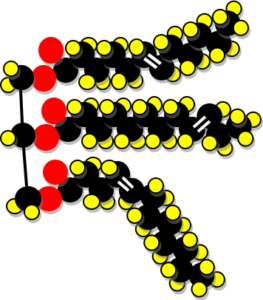 Biodiesel is produced when a catalyst, potassium hydroxide, is used to separate the fatty acids from the glycerol molecules. This produces fatty acid methyl esters, or biodiesel.

Renewable diesel can also be produced from triglycerides, such as those in corn oil. According to the U.S. Department of Energy, the process can involve isomerization, pyrolysis, and other thermochemical and biochemical means. Renewable diesel is formed by removing the hydrocarbon from the fatty acid and saturating the molecule with hydrogen. Methyl groups are then added to the molecule to lower the temperature at which it starts to solidify.

Introduce the topic and assess students for prior understanding. Let students discuss their ideas, and guide the discussion without telling them if they are right or wrong.

This biodiesel may still contain some potassium hydroxide catalyst. It would require washing and drying to remove this before it would be ready for use in an engine.

Determine the percent yield by volume of biodiesel from corn oil.

Use this percentage to determine the amount of corn oil required to produce one gallon of biodiesel.

If one bushel of corn can produce 700 mL of corn oil, how many bushels of corn would be required to produce one gallon of biodiesel?

There are several concerns regarding the use of biodiesel due to its differing properties with petroleum diesel. The difference in molecular structure causes it to be a solvent that is capable of dissolving some plastic components in engines and fuel systems not designed for biodiesel use. This is not a problem in newer diesel engines that have components made for use with biodiesel. Diesel, in general, can encounter problems in extremely cold weather as it can form a gel that is too viscous for fuel systems. Biodiesel can increase the likelihood of forming gel at a higher temperature. Biodiesel blends and the addition of antigel agents reduce this problem. Renewable diesel can remain liquid at lower temperatures as opposed to biodiesel. The cold weather properties are tested in a lab by cooling a sample and determining the point at which it starts to crystallize. This temperature is referred to as the cloud point of the fuel.

To learn more about agriculture careers, visit agexplorer.com.  You can also find career profiles at kscorn.com/careerconnections.

Investing in teachers is a priority therefore the Kansas Corn Commission is committed to providing materials and training to help teachers excel in the classroom.  Teachers who seek to expand their knowledge and skill of connecting science with agriculture are encouraged to attend a Seed to STEM workshop.