One form of genetic modification that has been used for centuries is artificial selection, or selective breeding. This is the selection of individuals or populations possessing desirable traits to produce the next generation. This process has given rise to many of the plants and animals we encounter every day. For example, different breeds of dogs. Some are good at hunting and retrieving game, and others are specifically bred for companionship and living in a house. Additional example, different breeds of cattle. Some are bred for milk production, and others bred specifically for beef. Corn has been developed over the years and is currently being improved to produce higher yields in drought conditions, resistance to pests, and other advantageous characteristics through this process. Artificial selection also played an important role in the development of the theory of natural selection. An understanding of Mendelian inheritance and statistical analysis of the results of crosses is important in determining the genes of an organism and the ability to produce offspring with the desired traits.

In this lab, students will observe ears of corn from F2 plants produced by a dihybrid cross for the traits of kernel color and endosperm composition, which changes the shape of the kernel. The color blue is dominant to yellow, and the starchy nonwrinkled endosperm is dominant to a sugary wrinkled endosperm. Students will hypothesize the genotypes of the parents (F1 generation). First, students will look at each trait independently, then look at the independent assortment or linkage between the two traits. These hypotheses will be used to make predictions that will be analyzed by collecting data and applying a chi-square test.

Students who demonstrate understanding can:

Students should be cautioned to be careful when handling ears of corn. If handled with care, ears may last many years, but may be damaged if handled roughly. Kernels may occasionally fall off of the ears, but may be glued back into place.

Length of Time for Preparation: 15 minutes

It is recommended to follow the teaching of Mendelian inheritance for this lab as students will need basic knowledge of inheritance and probability as well as the vocabulary associated with this subject and experimental procedures.

Students should also be able to predict ratios of offspring from monohybrid crosses using Punnett squares.

The chi-square value is compared with a critical value shown on the table in Figure 2 (above).

Reflection and Conclusion
A lab group received an F2 ear of corn that appeared to have equal numbers of blue and yellow kernels.
1. What F1 genotypes would most likely produce this ear of corn?
• Because blue is dominant, the convention would be to use B to represent the blue allele and b to represent yellow.
• Heterozygous x homozygous recessive (Bb x bb) would be most likely to produce the colors seen on this ear of corn.
2. If this hypothesis is correct, how many kernels out of 100 should be blue? How many should be yellow?
½ x 100 = 50 blue and ½ x 100 = 50 yellow
3. If the kernels were counted and 44 were yellow and 56 were blue, conduct a chi-square test on your hypothesis. 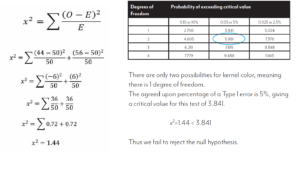 Assessment
1. In performing a chi-square test for pest resistance that is found to be expressed in three forms, completely resistant, somewhat resistant, and not resistant, how many degrees of freedom should be used?
3 possibilities -1 = 2 degrees of freedom
2. If a homozygous blue corn plant, BB, was crossed with a homozygous yellow plant, bb, what should be the predicted numbers of blue and yellow kernels if 100 kernels were counted on an ear of the plant produced?
All offspring would be heterozygous Bb, having blue kernels
100 blue, 0 yellow
3. A lab group in another section hypothesized the parents were heterozygous for both kernel color and shape, BbSs. When they counted the kernels, they recorded the following results. Calculate the expected values for their hypothesis and perform a chi-quare test on your hypothesis.

To learn more about agriculture careers, visit agexplorer.com.  You can also find career profiles at kscorn.com.