In this lab, students will learn about ethanol and its important role in our world’s ever-increasing demand for energy. Students will go through the process of fermenting and distilling corn for ethanol production.

There are many variables that can affect ethanol production. This lab may be used as a stand-alone lab, with a prescribed procedure for producing ethanol, or as a follow-up after performing Fermenting Fuel – Designing a Procedure for Fast Fermentation. When using this approach to the lab, students use their data to produce their own procedure and compete to see which group can produce the most efficient fermentation. This is determined by comparing the largest volume of flammable alcohol or the most CO2 collected during fermentation.

Materials for Filtering the Solids:

Length of time for preparation:

Teachers should allow for at least an hour to gather materials and prepare the necessary solutions. Preparation of the yeast should be done 2-4 hours in advance.

Length of time for classroom teaching:

Preparation of Enzymes (Prepare before the start of the lab):

The increasing demand for liquid fuels for transportation, increased world-demand for oil (gasoline), and the negative consequences of global warming have all contributed to the increased use of corn-based sugar to produce ethanol. Ethanol can be used as a substitute for gasoline, as it can be burned in many of today’s passenger cars and trucks. Most gas stations currently use 10% ethanol in their gasoline. However, it has also been used as 85% ethanol to 15% gasoline at some gas pumps, and this blend is called “E85” or “flex fuel”. Running this fuel in the gasoline engine typically does not require any mechanical modification. Not all gasoline motors are manufactured to run on E85, so it is best to check the vehicle owner’s manual before fueling up with E85.

In the United States, commercial production of fuel ethanol involves breaking down the starch present in corn into simple sugars, like glucose, and feeding these sugars to yeast for fermentation. Next they recover ethanol and other byproducts, such as animal feed, corn oil, and carbon dioxide. Ethanol is an alcohol produced by yeast during fermentation. Fuel ethanol is ethanol that has been highly concentrated and blended with gasoline to render the alcohol undrinkable.

For each pound of simple sugars, yeast can produce approximately 0.5 pounds (0.15 gallons) of ethanol and an equivalent amount of carbon dioxide. The value of corn for ethanol production is due to its large volume of carbohydrates, specifically starch. Starch can be easily processed to break down into simple sugars, and then fed to yeast to produce ethanol. Modern ethanol production can produce approximately 2.8 gallons to 3 gallons of fuel ethanol for every bushel of corn.

Ethanol production uses only the starch portion of the corn, which is about 70% of the kernel. All the remaining nutrients: protein, fat, minerals, and vitamins, are concentrated into distillers dried grains, which is used as feed for livestock. Some ethanol plants also remove the corn oil from distiller’s grain to create renewable diesel. About 40% of the United States’ corn crop is used to produce ethanol.

Possible topics could include:

Student Procedures developed in Kansas Corn: Fermenting Fuel– Designing a Procedure for Fast Fermentation can be used to prepare corn mash. After corn mash is prepared, the rest of the lab should be conducted as written. 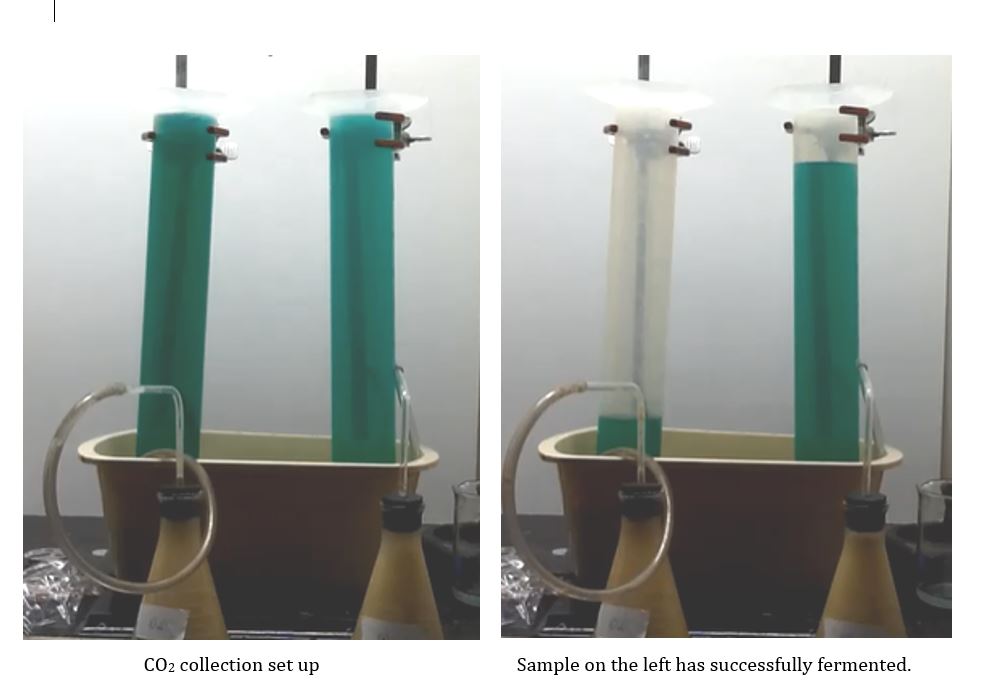 The experiment pictured was set up to test the effect of the amount of yeast in the otherwise identical samples. The sample shown on the right had the amount of yeast written in an unsuccessful lab procedure; the sample on the left had five times as much yeast solution.  (Note: A time-lapse video of this experiment is available at kscorn.com.)

Possible problems in fermentation, if less than 750 ml of CO2 is produced:

Calculating the Amount of Ethanol Produced from Carbon Dioxide

During fermentation, glucose is converted ethanol and carbon dioxide according to the following equation:

Because the carbon dioxide is a gas, moles/liter of a gas can be used to calculate moles of CO2. 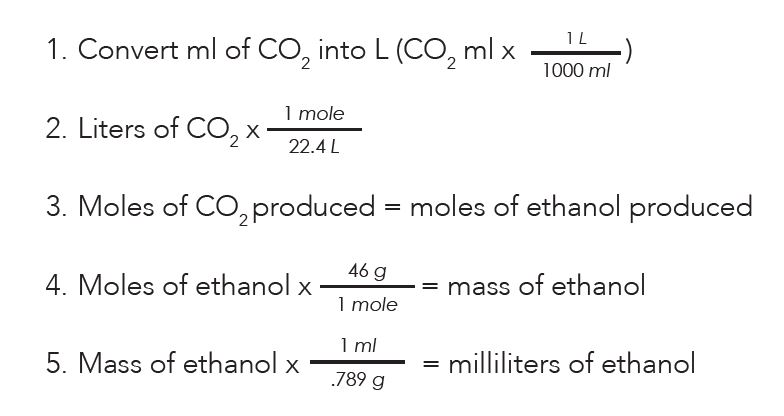 If a simpler calculation is preferred, this can be combined into:

To calculate mass of ethanol:

To calculate volume of ethanol: 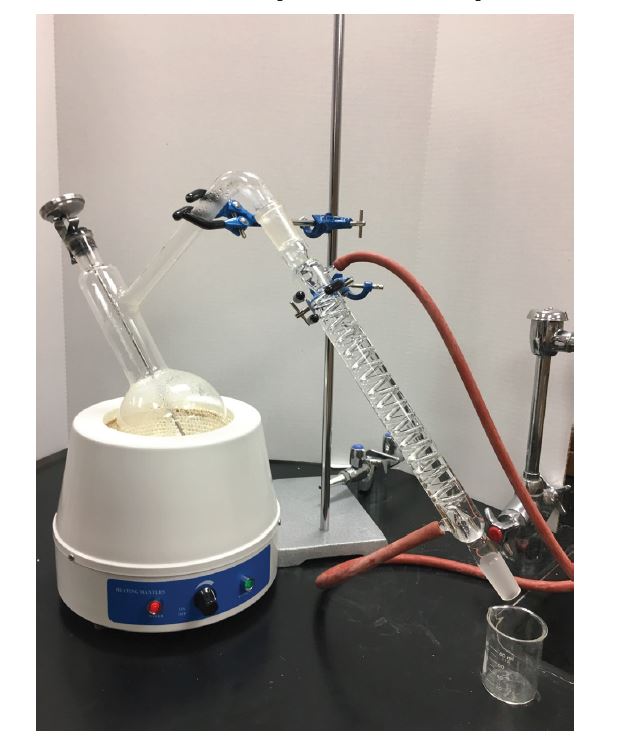 Use a pipette to remove a 2 ml sample of your distilled ethanol and place the ethanol on a watch glass or in a ceramic evaporating dish. Light the ethanol with a lighter. A quality sample will light with a pale blue flame. Time how long the flame burns. The longer the flame burns, the greater the alcohol concentration. If the distillate does not burn, the water concentration is too high.

If No Flame is Produced:

Ethanol’s boiling point is 78.37°C and water’s is 100°C; therefore, be careful to keep the temperature between these two boiling points. If distillation ran with temperature close to 100°C, the mixture may contain too much water.

There are two possible solutions: 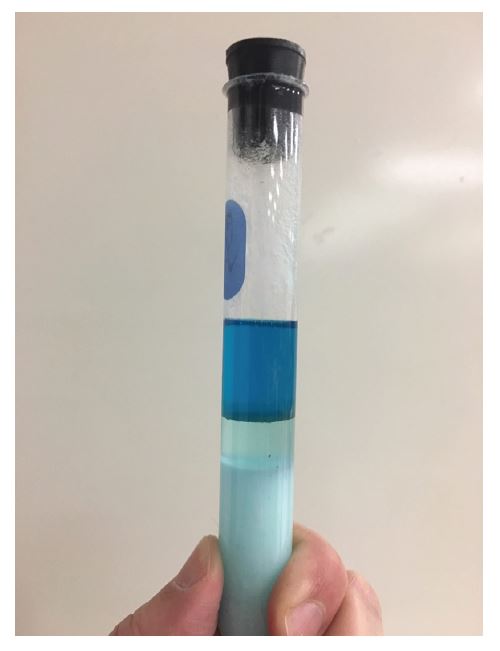 Potassium carbonate has saturated the water and forced the ethanol out of solution. The food coloring stays in the ethanol layer. This should be nearly pure ethanol.

Have students answer the following reflection questions, which are located in their Student Lab Packet.

Have students answer the following reflection questions, which are located in their Student Packet.

Ethanol is a part of the agricultural industry that has job openings from corn farming, ethanol production, to government policy jobs in Washington, D.C.  Ethanol product jobs are readily available, and so are jobs in biofuel research.  Typically, you do not need a degree to work in an ethanol production plant, but for higher salaries, consider a degree in agriculture, chemistry, biology, or a related field. Workers in ethanol plants transport the fermented corn to distillers, monitor the dehydration process, and package the final ethanol product safely. Car companies are increasingly advancing their research departments to deal with the growing trend of renewable energy. The government also hires workers for the research and development of ethanol products.